Just a short random post. Disregard as you fancy.

Yesterday, I was watching the seconds tick by on the T.V. screen (Roku’s screen saver is the time), I realized that those weren’t just numbers on a screen. It was my life ticking away and I wondered how many of those seconds I’d wasted.

In such a distracted world, it’s easy to let the seconds tick by. Don’t let that happen to you, love.

How much time have you wasted? How do you spend your time? Selfishly? Selflessly?

Sometimes we need to be reminded that’s we’re not immortal and we’re not invincible. We should live to the best of our abilities and have fun on the way but fun isn’t the reason for life. We should live to know, love, and serve God. It’s in the Catechism of the Catholic Church, although I’m sure any Christian would agree with me. 😉

And even if you’re not Christian, I’m sure you’d agree that one should live in the best way they know how. And that’s what I encourage you to do. ^_^

Please be praying for me. 🙂 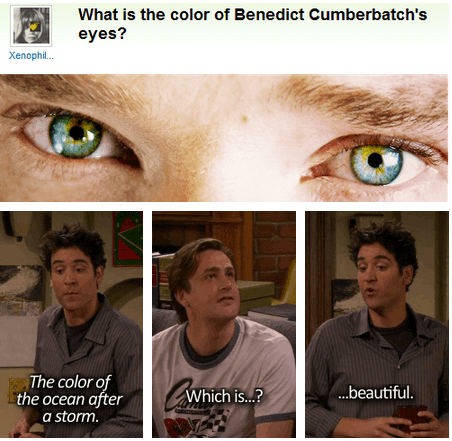 …you incorporate geeky subjects into your biology power point presentation. Yep. I did it.

Well, I haven’t given my speech yet, but I did one (without fangirling) earlier. I think it went pretty well! 🙂 I spoke clearly, projected my voice, and didn’t say “um” a lot. ^_^ I’m proud of myself. The subject was mitosis and meiosis.

That didn’t give me much room to fangirl. But my next speech/power point presentation will be on mutations! NOW I can fangirl.

Anyway. *cough* After I gave my speech, my brother did his (gosh, he’s such a wonderful speaker), and then another girl in my class named Kellie (I think that’s how she spells her name). She did hers on the reproductive system.

Apparently, I have a rather expressive face, so she kept pointing at me and laughing. Is that bad? Nahhhh.

So! How do you incorporate fangirlyness into a speech on genetic mutations? *chuckles*

GUYS, LAST NIGHT I WAS RESEARCHING ALL THIS STUFF. NO ONE WAS HOME AND I WAS LAUGHING. Laughing when you’re alone at nothing and everything is not good.

I swear. I saw the word “cheezeburger” and I laughed.

I was reading How Stuff Works and saw this, “In August 2007, many news organizations reported that redheads or “gingers,” as our British and Australian friends call them, would eventually become extinct.”

I LAUGHED. WHY? BECAUSE THE BRITS AND AUSSIES HAVE A PET NAME FOR MY KIND.

OH MY WORD. I’m a double mutant!!! My right eyeball has heterochromia and I’m a redhead. GINGERS ARE A RESULT OF MUTATIONS.

Everyone: I am a beautiful mutant. *stares lovingly into a mirror*

Is that funny? Is it something to laugh about?

I called my bestie up to talk to her. Maybe she could make me normal again (as if I ever was to begin with)… Maybe.

There was a 2 second silence and I forgot I was on the phone.

HOW DOES ANYONE FORGET THEY WERE ON THE PHONE?

I almost had a heart attack when she started talking again. O_O

I might have issues… but my parents won’t tell me.

I told my dad. He gave me a look, then proceeded to ask me what I took before he came home.

My answer? “COKE! DO YOU KNOW WHAT THAT’S A CODE WORD FOR? *whispers* …cocaine.” (I promise you, guys. I did not. I’m not a druggie. All I took was Advil, because I was in pain. But that was hours before.)

Something is not right with me. I suspect it’s the fact that I’ve been awake too long without sufficient sleep…

Wish me luck on this next speech, y’all!

Good grief! Time passes by so quickly! *shakes head* Sometimes I just want to go back to being four years old again where my worst nightmare was a clown popping up from the side of my squeaky red bunk-bed and making faces at me. *sigh* Ah well. Those days are gone (though clowns will always freak me out). We can’t stop time, only make the best of it, right?

And, even though I do this every time, I apologize for the horrible quality of my pictures. I forgot to steal my dad’s camera, so I could only take pictures with my computer at home after we’d gone trick or treating. (Yes, I’m 15. Yes, I still trick or treat. Yes, I do dress up. Yes, I do it for the candy. And because dressing up is fun.)

Anyways, one guy got the Sherlocked reference. It made my day. ^_^

Without further ado, here are the pictures. 😀 Hope you can actually see them… 😛 And I DID have tally marks on my arms! I promise! And mascara tears. You might be able to see the tears, but I washed the tally marks off in the car because I didn’t want to waste time doing it when I got home. 😛

I’d love to see what you came up with for Halloween! If you feel like sharing, go ahead and leave links in the comments! 🙂

Good luck to all you NaNoers! I’d do it, except my parents don’t think it’s a priority at this point in my life. *sigh*

>Lord of the Rings

>The Children of Hurin

>Sir Gawain and the Green Knight

>Poems and stuff… don’t remember the title of the collection

I used to have a replica of the One Ring. But, um, guess what happened. Yep. I lost it.

But I’ve got a little something for you fellow nerds! In case you weren’t aware, WE’VE GOT A SECOND TRAILER FOR THE HOBBIT: THE DESOLATION OF SMAUG!!! Excuse me while I fangirl over Mr. Benedict Cumberbatch’s voice. (My mom and I watched Star Trek: Into Darkness. She was like, “Are you sure that’s his real voice??” And I grin and I respond, “Yep.” She goes, “…It’s just so deep.” And I, with a satisfied look upon my face, turn my face back to the telly screen.)

Well, here you are, ladies and gentlemen! 😀 Care to share your thoughts?